There are large numbers of anglers (many experienced) who are not sure what the difference is between a water boatman and a backswimmer. Just to clear things up;

A backswimmer is the larger of the two. It has large hind legs for 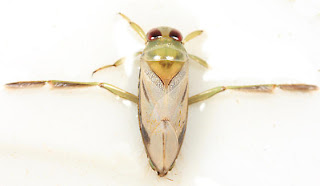 propulsion and swims on its back. It's underside is dark and it's wings are light, often a cream color with a mottled look to it. The backswimmer does indeed bite and reports are that it's bite feels similar to a bee sting. You'll usually find backsimmers on the surface of the water. 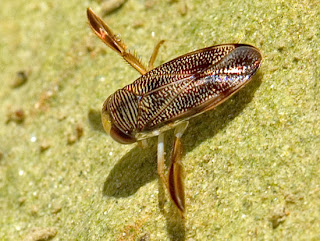 n is the smaller of the two. It also has large hind legs in the shape of oars but it's front legs are scoop shaped at the tips. It's underside is usually a masking tape color and wings are a darker mottled color (I've seen olive, brown and black in the Edmonton area). The water boatman does not swim on its back but right side up. It hangs near the bottom in shallower water near plant life and does not bite.

Most literature regarding boatman and backswimmers inform us that September and October are times when these aquatic life forms are most prevalent. Through my years of stillwater fly fishing however, as far south as the central Alberta, I've noticed that this time line is off by about a month. I've confirmed this in both the Edmonton regions and the Rocky Mountain House regions with observation of both boatman and backswimmers becoming quite active as early as late July. By mid August, fishing imitative patterns become progressively more productive and by the time September rolls around, trout start keying in on these bugs. By mid September, the water starts cooling due to colder nights and shorter days and trout will spend more time in the shallows feeding on the large number of these bugs.

There's also a lot of literature available that states fishing boatman and backswimmer patterns are most productive after the first frost. It's quite possible for this to be true in some areas of the world, but in these parts I find a cool night followed by a very warm autumn day in the mid to upper 20's (Celsius) seems to kick these bugs into their migration flights (also known as the boatman fall). If you happen to be on the water during a heavy fall, you'll notice they actually do look like little rain drops hitting the surface of the water. Once hitting the water, the boatman will pause almost as if stunned and then spin to break the surface of the water where they will dive to the bottom and lay it's eggs. It's at the pause and spin when trout take full advantage of the falling boatman. Unfortunately, the window of opportunity to hit this fall is more of a 'being on the right lake on the right day' sort of thing. If you're fortunate enough to be on the lake in the middle of a boatman fall, tie a floating boatman patter onto your dry line, wait for a rise and cast directly into the rise ring. Hits are usually immediate. It truly will be one of the best days you've ever spent on a stillwater fishery.

By early October, the boatman and backswimmer action starts to slow down. This is when I start to concentrate on slower or static presentations using bloodworms, scuds and leech patterns in shallower water. Boatman and backswimmer patterns can still be productive but the frenzy is usually over once the middle of October rolls around.

If you haven't already tied up some boatman and backswimmer patterns, you better get to it. Before you know it, the action will be long gone and your favorite stillwater fishery will be locked in ice for another six months.

Here are some links to a few good patterns.