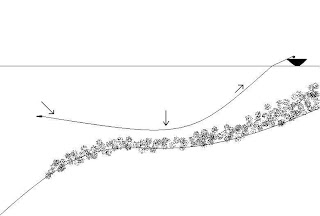 The traditional sink line, also known as a standard sink line, forms a belly in the line as it sinks leaving the thinner tip section of line higher up in the water column. These older style lines have, for the most part, been replaced with uniform lines but can still be found and still perform extremely well in certain situations. I have to admit, when I reach for a sinking line, I’ll put on a uniform line 90% of time but there are still situations when the traditional sink line is exactly what is needed. [read more...]
Posted by Mike (Doc) Monteith at 10:13 No comments: 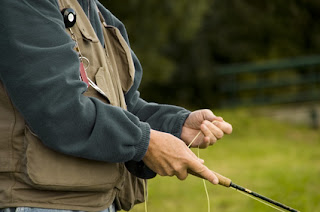 The retrieve when fishing stillwaters should, for the most part, imitate the natural movement of the flies you’re fishing. Making your flies behave in a life-like manner is an important aspect of fly fishing and even though you may find at times a retrieve that in no way mimics the naturals seen in the water may induce a strike, concentrating your efforts to closely resemble the speed and swimming motion of the naturals [read more...]
Posted by Mike (Doc) Monteith at 00:05 No comments: 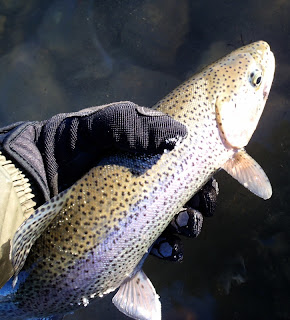 My good buddy Joe and I headed down to the Bow River a few days after Christmas.  We checked the weather in Calgary and it looked like it would be manageable.  I'm sure it never got over the freezing mark as I was removing ice build up on my rod guides the entire day but as long as the sun stayed out we were pretty comfortable.  When we first arrived there was another fly guy already in the run we wanted to fish chuckin' a nymphing rig with a big indicator (same thing we planned on doing) so small talk was made and we eventually asked him if he wouldn't mind us jumping into his run.  He said he was moving on anyway so no problem, we thanked him and watched him disappear down stream.  The fishing was less than stellar, I've had way better December days on the Bow than this day and only managed to net one Rainbow and one Brown.  Joe?  Well even worse for him.  Petty sure he landed a few sticks (gotta get my jabs in where I can) and even had a couple of hits but nothing to the net.  I'm really ok with how the day went, we got our fix and shook off the shack nasties.  I'll be honest with you, I am 'not' one of those guys that are ok with catching nothing but on this particular day in December I can honestly say...it was nice just being out in the water. 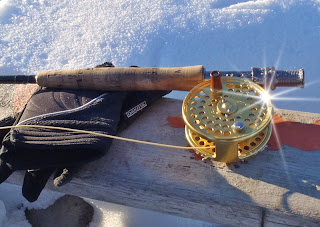 Here's another article I wrote for Fly Fishing Central about hanging flies under indicators.
When stillwater fly fishing, hanging chironomid patterns under an indicator is one of the most popular if not highly preferred methods of fishing a midge. This technique works whether fishing the larval or pupa stag of the chironomid although the pupa gets far more attention because of it’s slow assent to the surface and availability throughout the water column. For fisheries that allow using two or more flies, your options open up which can lead to improved success. When searching for the strike zone, a multi-fly system can both speed up your search by targeting different depths on the same rig and using various colors of patterns can more quickly determine color preference by selective trout. Another window that opens up [read more...]
Posted by Mike (Doc) Monteith at 19:33 No comments: