All Good Things Must Come To An End

If you've never lived in Edmonton, you wouldn't know what we as fly anglers go through every winter. Living here in the summer means you're either a stillwater fly guy or you spend a lot of time behind the wheel looking for a likely place to dab a fly on some moving water. We're not blessed with near by streams or rivers that hold trout. We do have the the North Saskatchewan River running through our city that offers up a variety of game fish like Walleye, Pike, Sauger, Goldeye and Mooneye and I have to admit, this river is highly underutilized but down this way, it doesn't hold trout. So yah, we got it a little tough here in the summer but we get by and we are blessed with some of the most fertile stillwater fisheries anywhere in the country. The winters here however make it really tough. Three hours south of us, the fly guys in Calgary have the opportunity to shake off the winter shack nasties whenever a Chinook rolls through town as the Bow River remains open all year offering up trophy Rainbows and Browns. In Edmonton, our salvation during our six months locked in ice and snow came in the form of a trophy Pike lake. Lake Wabamun not only offers up really big Pike but because of TransAlta's coal burning power plant, also gave us open water when all other waters are frozen over. The plant would draw in cold water from the lake to cool down the generators and push the warm water back into the lake via a man made channel. For years, anglers with the need to wet a line could head out to the lake at the mouth of this warm water discharge with expectations of good catch rates and bigger than average Northern Pike. This year that all changes as TransAlta is shutting down the last remaining generator by the end of March. So, what the hell are we gonna do now? 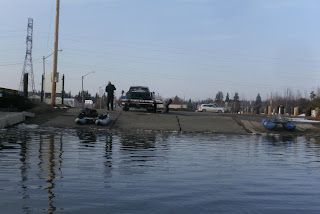 On Thursday March 25, 2010, Garnet, Joe and I headed out to Wabamun for what would be our last open water, winter/early spring fly fishing trip. We were happy to see the water was open right to the boat launch as our previous trip a couple weeks before had us dragging our pontoon boats across the ice to the open water at the end of the peer. The forecast high for this day was +8c with the wind diminishing to a calm breeze by afternoon. With a forecast like that 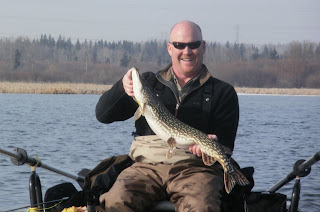 we were hopeful that top water flies would entice some strikes as calm water helps the pike see your top water presentation better. We all got into Pike right away, with some good size wolfs being caught but none of us could hook up with a 40+ incher. It was an on and off again day and we found that changing up flies brought better results. We all tried a variety of flies, at first I did 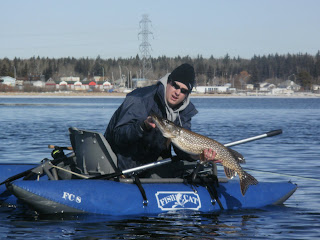 well with an orange and green half & half but then had to change to a white and purple Popsicle leech to see more action. The Popsicle leech was definitely my hot fly for the day as I took eight pike on it. The top water flies didn't hook up any fish although Joe did get one follow but it turned away at the last second. Final tally for the day... Garnet five, Joe 14 and 15 for myself. A great day to the end of an era. I'll still be fishing Wab for many years to come, but I'm gonna miss this lake when the shack nasties set in. Guess we'll be watching the Calgary weather forecasts a little more closely and crossing our fingers for those Chinooks.
Posted by Mike (Doc) Monteith at 12:03 No comments:

Just caught the new video from Dave and Amelia Jenson. What a beautiful place to catch trophy brookies. I've never had the pleasure of fishing Fortress myself, just not in the budget. Hopefully someday. For now I'll live vicariously through others that have videos like this. Great job from the two of them, I hope to see more videos like this.