Another season underway.  Spring came late to Alberta this year and I've been just as anxious to wet a line as my clients.  2011 is the first year I've offered beginner casting lessons and the response has been overwhelming with so many e-mails and phone calls.  In the two weeks we've been open this season, I've managed several clients for lessons as well as the introduction to stillwater fly fishing clinics, all while still working my full time job.  The wind hasn't been any help what so ever with many days of wind gusts to 100km/hr but luckily we've only had to alter the one clinic to a half day with the on the water stuff coming up on June 5th.  I just hope the wind has showed the majority of it's temper for this season.  If you or someone you know maybe interested in a stillwater clinic or beginner casting lessons, drop me an e-mail at mike@albertastillwaters.com. 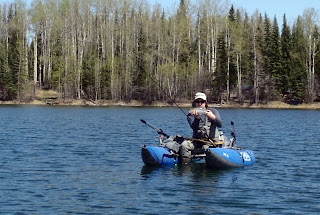 Working with clients on their casting had really given me the itch to get out on the water and do some casting of my own.  I had gotten out once this May to Salters Lake but the majority of the lake was still iced over so I'm not counting that one.  My good buddy Joe (Jokey) and I headed out to Millers Lake on May 16th in hopes to get into some football shaped rainbows and maybe even hook into the odd brown that's known to be cruising around the lake.  I watched the weather reports closely as once again the winds were wreaking havoc in Alberta.  After some careful consideration of where we could stand a few hours of hurricane like winds with some possible shelter, we decided on Millers lake near Edson.  The weather report for Edson stated; winds of 20km/hr gusting to 40 which was far better than what we could find in other areas relatively close to Edmonton.  It was a pleasant surprise when we reached the lake and had to fight a stiff breeze at best.  It did get a little windier later on in the day but I don't think the wind got stronger that 20km/hr the whole time we were on the lake. 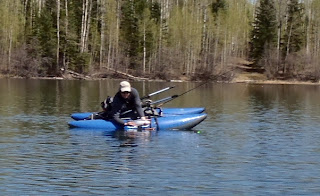 Once on the water Joe headed into the shallows and picked up a few stockers while I headed straight to the drop-off at the south shoal.  After some time Joe made his way over to my location and and anchored down about 40ft from me.  We both hooked into a few but after about 10 mins I noticed Joe was hooking up on almost every other cast.  After we realized we both were fishing the same flies, I switched over to a leach dropper with a bloodworm on the point.  While I had no success, Joe continued hooking up.  I then changed back to my original set up of a chironomid pupa as the dropper and leaving the blood worm on the point. I started hooking up again but nothing like what Joe had been doing.  After some verbal abuse from Joe, he convinced me to move closer and start casting into his water.  So I did. First cast, fish on.  It appears Joe found a feeding lane right near the drop off.  I should have poached his water a lot sooner.  We never did hook into any browns but those little footballs fought very well. Final count, Joe 24 - Mike 13.  All trout were between 14 and 18 inches.
Posted by Mike (Doc) Monteith at 10:18 No comments: