It's funny you know, when I first heard about chironomiding I didn't understand the whole chironomid craze. I got away from still fishing because I wanted to become more involved in the catching process. The fly rod to me was the "next step" in the fishing evolution. The art of tight loops, the constant searching for your game, trying to imitate food sources through different techniques and presentations. Chironomiding or fishing static presentations almost seamed like taking a step back. Staring at an indicator (a fly anglers name for a little bobber) for hours on end just wasn't my vision of what fly fishing was all about. Then I tried it. My first impression was less than favorable, I didn't see why it was so dam popular. I wasn't catching as many fish as when I was working weed beds and drop offs with a nymph on a sinking line. Of course I still didn't understand a lot of the intricacies of chironomiding like how important it was to be anchored. Like most things in my life however (with the exception of my guitar), I couldn't give up on it until I mastered it. So I did tons of research (mostly reading) and putting what I read to practice. I started catching more and more fish but still didn't see why so many had gone crazy for this style of fly fishing.

It was a warm afternoon in May on a local Edmonton trout lake when the "light bulb" finally clicked on. I launched my float tube and was making my way out onto the lake when I saw these large midge shucks (bombers) floating on top of the water. There were thousands of them with more hatching right before my eyes. I became rather excited as everything I had been reading about fishing chironomids had told me this should be an excellent day. I let my anchor down, slid on a strike indicator and tied on the biggest bomber pattern I had in my fly box. Well, it didn't even have time to sink when I saw the indicator rush under. I played a nice, active, 17" rainbow, brought it to the net and happily released it. Of course I didn't think the fishing would be anywhere near this kind of excitement but I was optimistic that it may be fairly active. Nope, I was wrong. For the next three hours, it was almost exactly like that. Maybe not a take before the flies sunk (although that happened frequently) but a strike on nearly every cast for almost three hours. I caught lunkers, stockers and all sizes in between. Now I understood the chironomid craze! Though the hour and a half to follow wasn't as stellar, I probably caught more fish in that short time than on a normal day of fishing. Although I never knew it at the time, that was my induction into the "Chironomid Cult".

Today I teach others how effective chironomiding can be as well as other styles and techniques through stillwater clinics and guided trips. It's a lot of fun to watch folks get there first hook up on a chironomid and sometimes I even get to see their light bulb turn on. If you're interested in a stillwater clinic or a guided trip, you can cut the learning curve in half by sending me an e-mail and booking a trip with AbertaStillwaters.Com today.

Here's fun video called The Chironomid Cult. I wish it was as exciting as this video all the time but when there's a good hatch on, this video is pretty close.

June in Alberta was one of the driest on record. Farmers in the Camrose area declared a local state of agricultural disaster as extremely dry weather conditions damaged to up to 80% of their crops and cattl 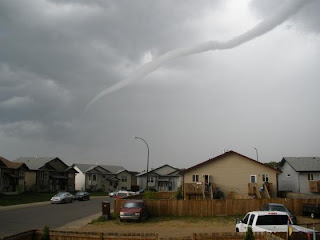 e producers are struggling as the majority of their pasture lands dried up. July however has been a complete turn around. Some parts of Alberta has seen well over 100ml of rain in a couple of days and reports of funnel clouds have been spotted in many areas throughout Alberta. We even had a tornado touch down near Bentley Alberta. If you had plans to hit some streams and rivers this week, you may be a little p.o'ed as the reports coming in on the Alberta Fly Fishing Forum are seeing blown out conditions. High, chocolate brown water around the Hinton area have been reported with the Wildhay, Berland and the Muskeg rivers having very high flow rates. A high streamflow advisory has been issued for the Smoky River and all its tributaries in north central Alberta and more rain is predicted for the future days ahead. Well, I feel for ya. But all is not lost. Alberta's trout lakes got some much needed topping up as lake levels have been very low since last fall and water temps in these lakes needed a litlle cooling off. The fishing around Edmonton's local lakes has been good and hopefully should get even better. Got out to Star Lake on July 5th with my buddy Phil and we did well fishing in deeper water using a static presentation with chironomid and leech patterns. We both got into some good size trout with the larg 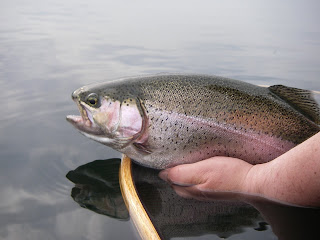 est of the day being this 23" rainbow caught on a Redd October bloodworm. If you've had trouble finding big fish in the past or find stillwaters a little intimidating, why not book a stillwater trip or clinic with me and I can show you how to find Walter for yourself. Visit my website AbertaStillwaters.Com for more information.

I want to wish all my fellow Canadians a happy Canada Day. I, unfortunately; have to work today (so no fishing for this hosehead) but I hope all you folks that get the day off have a great time pulling in some lunkers. I am looking forward to the fireworks tonight however.

Here is a video of some of my proud Canadian brothers and sisters when my beloved Oilers made it the Stanley Cup.