Spring really is in the air.  Unfortunately, here in north-central Alberta our lakes are still locked in ice. It'll be some time yet before us stillwater guys get to wet a line in our preferred method and although we had a mild winter by our standards, it's still been a long winter.  So, Joe and I decided to to head out somewhere where we could wet a line.

I've fished the North Raven River three times previous to today.  Also known as Stauffer Creek, I've heard stories of the odd big brown being caught and I've seen photos of some decent trout from this small central Alberta spring creek but I've not experienced it myself.  On my previous trips, a 14 inch brown was a really good day, if I was lucky enough to catch anything at all.  So I'm not convinced I earned a big brown like this from Alberta's most legendary spring creek as I really haven't put in my time on this challenging fishery.  But it did happen just the same and who am I to complain.  We experimented a lot with different patterns and techniques and that experimenting paid off.  Joe was the first to land a brown today, it came in at around 14 inches.  He had a few other good hits in that hole as well and saw one good brown rise that was big enough for Joe to let out a holler and let me know (we assume it rose for a winter black stonefly as they were coming off in big numbers).  A black bead head bugger fished in a slow pool was the ticket today and produced both trout but the action didn't pick up until the sun came out around 1:30pm. 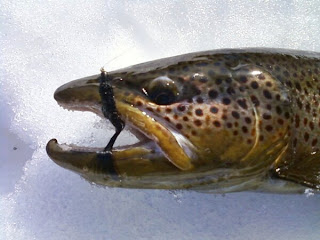 Not sure when I'll get back to this little gem but I do know one thing; I will be back. Great way to kick off our first trip in 2012.  Btw Joe, those sandwiches were awesome, thanks buddy, wings are on me.
Posted by Mike (Doc) Monteith at 22:29 2 comments: