Another wet month for Alberta and summer, as we are used to, just never seemed to arrive.  The rivers have remained high due to continuous rain, many are still unfishable but some are finally flowing clear and low enough to cast some dries and catch some fish. 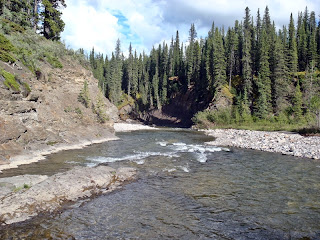 Last year around this time, a buddy of mine talked me into fishing the Blackstone with him.  Not being much of a moving water guy, I reluctantly accepted his request and ended up having a fantastic day on the river.  So when the phone rang and Garnet asked if I would be interested in coming down to fish the Eastern Slopes with him, the name Blackstone popped out of my mouth instantly.  After an ok from the better half and a confirmation from Joe that he too would be joining us, plans were made.

After a bit of exploring in Garnet's 4X4, we decided to park and get geared up.  It was close to noon when we decided on a spot to park and hike down to the river.  It was a beautiful, sunny Sunday and the weather report didn't call for any rain.  We really didn't know what to expect when we started heading into the bush from so high up or how we would make our way down to the river but things worked out nicely as we were fortunate to come across a little camp atop a ridge overlooking the river. The camp was surprisingly in good shape featuring a good size fire pit, lots of cut wood, a prep table, an outdoor shower and what we have to believe is a bathroom.  Although we all thought this little camp was quite clever, the fortunate part came while starting down the steep ridge.  As Joe was traversing down he came upon a set of steps that have been carved into the side of the mountain.  The creators of this little camp really did think of everything. 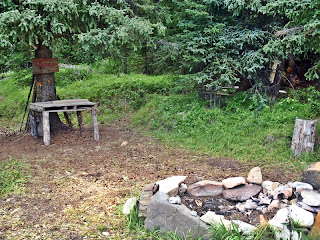 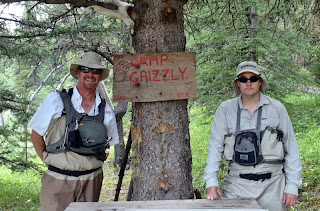 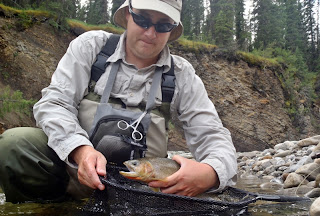 This section of the Blackstone was new to us and a lot more remote than the section we usually fish from the bridge to the gap.  It proved to be a good choice as the cutthroats were very willing to take a drifted fly.  I decided to fish with a foam stimulator as we headed up stream and then switched to a large white and purple popsicle leech to fish on the way back downstream (hoping to hook into a bull), Garnet started with a small mayfly and later switched up to a stimulator and Joe enjoyed experimenting with several different flies and set-ups throughout the day.  Between the three of us, we hooked up with about 60 cutties all between 6 to 18 inches.  What's really sweet about the Blackstone is how close you are to the next great run or pool.  Although we did a lot of walking, we also did a lot of fishing. It was hard to actually decide what pool we would stop at and start to make our way back, the thought of all the great pools to come could get a guy in trouble as time flies by quickly when the fishing is this good.  I think one more trip before the snow flies is in order.  Garnet, you can call me with an invite anytime buddy. 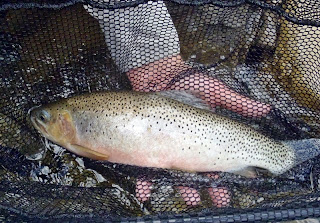 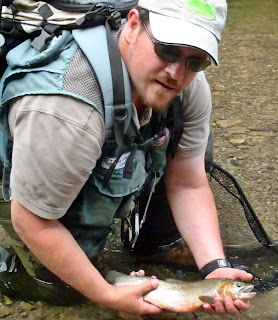 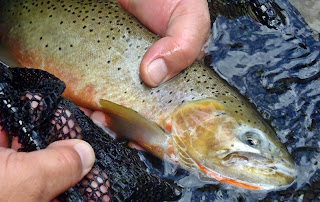