I didn't want to post again 'til I took some fishy pics to add here. Well; I'm posting anyway. That's right, no pics. Seams I'm in a rut right now. I fished Muir on Sunday September 14 & the 24. I also fished tonight for 3.5 hours. I landed some decent fish on the 14th but forgot my camera. On the 24th, I lost all fish I hooked into. Both last Sunday and tonight were information trips as I wanted to try all the methods that I know of regarding fishing boatman patterns. I fished floating and weighted boatman on a floating line and on both tradition and uniform sinking lines. I also tried both floating and weighted boatman in tandem first with the floating on the point and then later as the dropper. About the only method I didn't use was a boatman under an indicator (which works great at Dolberg Lake by the way). I used various retrieves; a slow hand twist, long slow strips, short quick strips, twitching with long pauses, fast long strips, etc, etc... Both the floating and weighted boatman on the floating line got more attention using a slow long retrieve with long pauses. The most hook-ups (although few and far between) on both types of sinking lines came from quick short 3-4 inch strips. The next three or so weeks up north here should be boatman/backswimmer heaven so get those flies tied. As far as my catch rates? None! Tonight I got broken off four times, had three Ralphies and lots of takes where trout were on for about one second. But none to the net. Anbody got a good prescription for RUT?

On another note I've puchased an HD video cam and have started recording some interesting things. I've been throwing around the idea of doing a feature "video blog" once amonth with fishing footage and whatnot but haven't made up my mind yet on that one. At the least you can look forward to some video projects on my blog in the future.
Posted by Mike (Doc) Monteith at 21:51 2 comments:

They say everyone in the world gets his or her 15 minutes of fame. Well, the universe still owes me about 10 minutes but I'm happy with the five minutes I did get. I taped a show with citytv back on July 15 for a signature segment showcase called 'Nick's Nosh'. The idea was to teach the host (Nick) how to fly-fish and cook up a trout for a shore lunch. Nick did hook into a few but unfortunately couldn't get one to the net. I hooked into my fair share but only managed two to the net, one of which had parasites so we let that one go. The show aired this past Monday and I have to say it was a lot of fun. There may be an opportunity for me to film another show (this time a full half hour) coming up in the near future. I'll let you know more if and when the time comes. In the mean time, here is the video of the show we did back in July.

I got two phone calls from my buddies last night. Chuck Harvey and Phil Rowley called me up and asked if I'm in for some fis 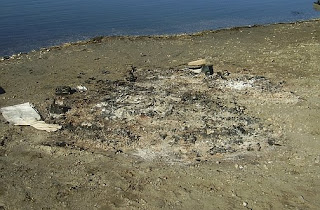 hin' at Muir. Uh, no I'm done fishing for the season... CHA! I'll see you there at 10am Monday morning. So when I got there this morning and backed my vehicle down to the water to set up my 'toon I see this big burnt mess right at the launch. Phil comes down to the water and points out a rock where a molotov cocktail had been thrown against it. If you look close at the pic, you can see the broken bottle with the burnt rag. What is wrong with people? First there are no fires aloud there 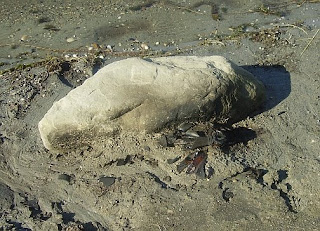 never mind right where folks launch their boats and second, why the hell are they throwing fire bombs? To top it off, whatever they were burning in the fire had a shit load of nails in it. I cleaned up most of the broken glass both from the fire and the molotov cocktail and cleaned up a lot of nails. I was going to finish picking up the rest when I came back in but someone beat me to it.

Just before I headed o 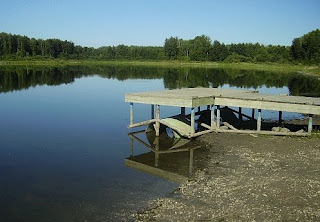 ut onto the water, I noticed the dock and the lack of water under it. I've never seen the table this low at Muir before. If you look close enough, you can actually see that the end of the dock isn't even touching the water. I hope we get a lot of snow this winter to bring the levels back up.

I headed out onto the water at about 11am, Chuck had showed up earlier and was on the water already and Phil had got out just before me. We headed over to the south side of the island and parked ourselves in our usual spot which didn't really produce for us so after a while we all split up. Chuck -who had caught a 24 incher before we arrived- (see pic below) started trolling around the lake, Phil headed over to the south shoreline with his two sons and I went north-east to the flats. After I dropped my anchor, I set up with a small boatman on the point with a bloodworm (Redd October) dropper. I was fishing in about 9-10ft of water and I set my indicator so it would present my dropper 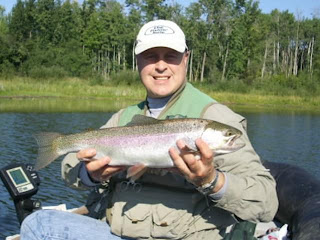 one foot off the bottom. On the first cast I hooked into a nice one and... Dam! He got off. I reset the indicator and on my second cast the indicator goes under again. I set the hook and play the fish for about 3 minutes when it dives for the weeds and... Snap! Another nice one gone. I setup again this time with 6lb vanish as my tippet a chironomid on the point. I set my indicator, cast out, wait a couple minutes and I'm hooked up again. The trout is jumping like crazy and... spits the hook. Oh, I'm choked now. I cast out again for the fourth time now, strip, wait, strip, wait and... nothing? Hmmm. Cast out again. Strip, wait... the indicator goes under and a 24 inch rainbow is leaping out of the water over and over again. I'm sure I'm gonna loose this one too but after fighting him hard I finally get him in. I take a quick pic, pump the throat to find eight boatman and two stickleback minnows. I then let him swim away on his own steam and wouldn't you know it, my biggest Muir Lake bow to date and the pic didn't turn out. I caught three more in the flats after Chuck and Phil 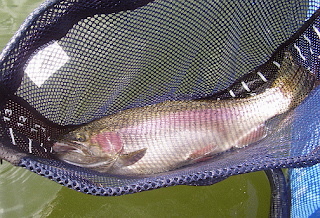 made their way over. And then one more on the north-west side of the island using boatman patterns. All trout were between 19 and 24 inches. Wasn't a banner day by any means but a whole lot of fun with good company.
Posted by Mike (Doc) Monteith at 19:47 1 comment: