With the exception of some unwanted snow, it started off as a pretty decent spring. Of course we Alberta folks should be used to snow in May, we get it pretty much every year. Not sure why it's always such a surprises to us when it comes but once again... Surprise!. What was nice though was all the rain we got. The talk before the rains got here was another year of drought, maybe the worst we've seen in a hundred years. And the lakes around these parts needed rain and bad. Although we got our fair share, it was a mere drop in the proverbial bucket. Lakes are still way down but just imagine what shape they would be in now without all that rain. So the rain made me feel somewhat at ease. Then that ease turned to panic. Seven years ago, my wife and I had our house built on the North side of Edmonton. We watched as our house went through the stages from an empty lot to it's completion. Along the way, after the foundation was poured, I noticed they had an opening for a window in one of the downstairs bedrooms right where the cement steps were to go out of our kitchen. I quickly pointed this out to Pat (Lupa homes) and he had them cut a new window into the foundation around the corner. They took the slab from the newly cut opening and filled in the misplaced opening. After that they slapped on the window well, threw in some gravel and everything was good, right? Wrong! I just found out they forgot (or were to cheap) to put weeping tile from the window well down. How did I find out? The water had made it's way into my oldest daughter's room under the window jamb, down the foundation wall, along the floor through the bathroom and into my youngest daughter's room where it pooled under her bed until it made it's way out into the downstairs living room. If you're wondering, my insurance does not cover this (*Note: neither does yours). If it was caused by sewer back up, the hot water tank or even the sump pump, we'd be covered. But because water from outside found it's way through the foundation, no coverage. So what's the damage? New dry wall and paint, new carpet, new beds, new dressers, the loss of stuffed animals and toys, the cost of weeping tile in the window well (no quote on that yet) and the cost of a huge garbage bin in the drive way. I also lost three new fly fsihing customers (although I hope they will book in the future) due to the countless hours of getting out everything wet before the mold takes over. So in case you're wondering why no blogging lately, now you know.

I did get out with a client right before the flood. Tom was in town from Detroit on business and wanted to spend the day going after stillwater trout. 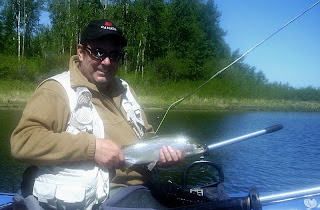 Wasn't a banner day but the action was ok. We headed out to Muir and he ended up catching a few good ones and seemed to really enjoy the relaxing methods of fishing chironomids and balance leeches under an indicator. I actually didn't have any balance leeches on me so Emerson ended up lending me a couple. Emerson was doing well hooking into them, not so well keeping them on however (been there). This trip was actually my first guided trip of the year as all my clients up to this point have booked my introductory clinics. I actually prefer the clinics as I find it much more rewarding but it is nice to mix things up. I'm now looking forward to a nice relaxing day on the water to celebrate father day. Hope you all have a great Fathers Day, maybe take the old man fishing eh.
Posted by Mike (Doc) Monteith at 20:39 No comments: