In my last post, I embedded some videos to help you get your boatman and backswimmers tied up. I've been tying myself lately and thought I would try a few out at Muir Lake on Monday. I got out on the lake in the late afternoon and fished into the evening. The action was really good. I got to talking to a fellow fly guy (Wayne) before I headed out and we started talking about how Muir has been fishing and he explained how well he had been doing using the Ultimate Boatman. I haven't as of yet tried tying any of these up but have used them in the past. I got a couple from Phil when we shot The New Flyfisher episode on Muir back in 2008 but those are long gone. Wayne was kind enough to give me a couple and they once again proved their effectiveness. The patterns he gave me were white so actually represented a backswimmer as apposed to the the dark shell of the boatman. I first anchored down near the weed edge close to where we install the aerators. I hadn't tied on the ultimate boatman yet as I already set up my rod before Wayne gave me the patterns. I started fishing my own version of a floating backswimmer pattern as the point fly along with a boatman pattern I came up with (still to be named) as the dropper using an intermediate clear sinking line. I was watching large trout rising on the surface right near the tall weeds so I anchored down in about eight feet of water within casting range. I saw what looked like a nice trout rise, it was rolling to the south so I placed my fly about five feet south of it's rise ring and it took the boatman. 1st cast, 18 inch rainbow. I knew this was going to be a fun day, or was it? 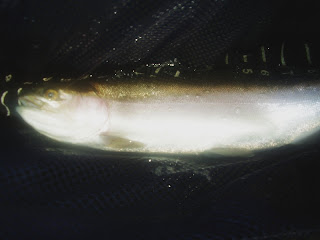 I stayed there for another 1/2 an hour without any more hook-ups so I decided to move. I pulled up anchor and made my way through the thick weeds which was not an easy task but using the oars sure beats fins and a float tube. I made my over to my favorite spring spot (Mansion Point) and anchored down again in about 8ft of water and within casting distance of both the tall mid-lake weeds and the shore line. It was a good choice. On my third cast just as my flies hit the water a nice 20 incher slammed them taking the backswimmer. After a fairly laid back fight (trout were a little on the lethargic side) I tied on the white Ultimate Boatman for my point fly and after watching a kazillion #18 brown shelled boatman surfacing for a new bubble, I decided to change my boatman pattern to more resemble the naturals as well. The rest of the evening saw nine more trout to the net. Two were under 17 inches, the rest were between 18 and 20. What a blast, I love this season. It's to bad it has to end with snow and ice. 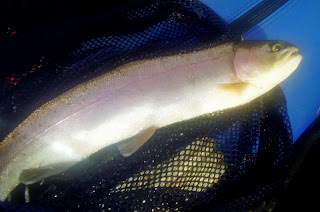 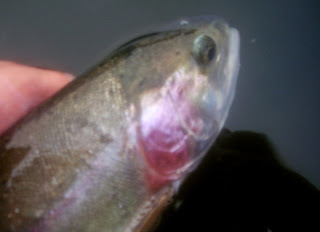 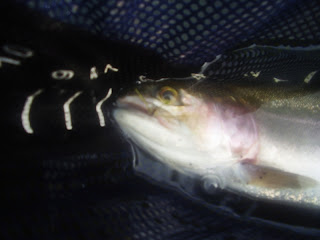 It's that time of year again.  Up north here it starts a little sooner than more southerly water bodies. Last year at this time I wrote a short article on them.  Of course I'm referring to boatman & backswimmers.Good reports of trout being caught at Muir Lake are already coming in using various patterns.  This year I thought I would post some interesting videos to help you get ready for your fall tying and fishing.  Enjoy.