Another Chance To See Dave & Emily

missed the Dave and Emily Whitlock show? Actually, due to circumstances beyond the control of the Whitlocks, or the Northern Lights, Dave and Emily could not

appear. In their place, Jim McLennan and Phil Rowley jumped in to save the day(s). Phil presented expert stillwater information and Jim with some outstanding stream advise. A high percentage of those who attended were very pleased with all the information presented and very thankful that these two gentlemen stepped up to the plate on such short notice.

If you would still like to see the Dave and Emily two day seminar, they have been rescheduled to appear on April 25 & 26 at the club's meeting hall. For those that had already purchased their $80.00 tickets, you can purchase tickets to the Dave & Emily presentation for only $25.00. For everyone else, you can purchase tickets for $80.00. For more information, check out the NLFT&F's website here.
Posted by Mike (Doc) Monteith at 20:27 No comments: 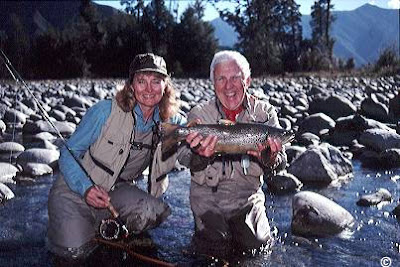 The Northern Lights Fly Tyers & Fishers in conjunction with the Edmonton chapter of Trout Unlimited are presenting a fly fishing seminar with presenters Dave & Emily Whitlock. The seminar will be held at Grant McEwan Community College at 106 St. & 104Ave in Edmonton Alberta, Room #6-212 from 9am to 4pm Saturday and Sunday January 17 & 18, 2009. You'll have the opportunity to learn from one of the most well known Fly Tiers & Fly
Fisherman in North America along with a number of raffles featuring some outstanding prizes to support this event. Tickets are available for $80.00 from the Northern Lights Fly Tiers during their Wednesday evening meetings and from the following Edmonton retail stores: The Fishing Center, Fishin' Hole West & North and Wholesale Sports.

Dave is a well known author of many published books including Dave Whitlock's Guide to Aquatic Trout Foods. For more about Dave and Emily Whitlock, visit their website here.

I can't believe it's already January 10 of 2009. Time feels like it's just whipping by and yet in the same breath, it feels like I haven't wet a line for a really long time. Another Christmas has come and gone and a very long cold snap here has finally ended. We had many, many days of -30c temps (or colder) and not very many warmer then -20c in the last three weeks. Today it hit 0c for the first time since, well, I don't remember (a long time). The new job is going well. Another month at it and I should be ready for a few trips south for some Bow River fly-fishing.

news for North Central Alberta fisher folk. The Edmonton Chapter of Trout Unlimited will be merged in with The Northern Lights Fly Tyers & Fishers club. TU Edmonton was originally started by fly anglers as a way to get together to #1, start conservation projects on the waters in North Central Alberta and #2: meet once a month in the winter for informative, educational and entertaining programs. With the formation of the Rocky Mountain House chapter of TU, most of the waters we fish have now fallen under their chapter and with the NLFT&F's popularity growing each year, members were reluctant to come out to TU meetings as much the same programs can be seen at their weekly club meetings leaving conservation as the Edmonton chapter's only draw. And conservation just isn't sexy enough to put warm butts in the seats. This last Wednesday, the executive of the NLFT&F's and T.U. Edmonton pitched the concept of a merger of the two clubs with one meeting per month dedicated to Trout Unlimited and cold water conservation. The club will now be known as the Northern Lights chapter of Trout Unlimited. Memberships will have to be worked out as far as this coming year but eventually, to join you will need a T.U. membership. This will open up a lot more doors for the Northern Lights club as far as raising money for worthwhile causes as well as giving conservation efforts more exposure. I'm really excited about this merger and if you're in the Edmonton area, I hope you are too.
Posted by Mike (Doc) Monteith at 17:38 No comments: