Say Goodbye To Winter Wab Pike On The Fly 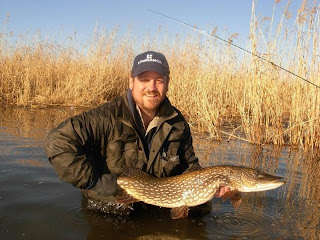 The slightly warmer temps we've been getting the last few days has got me to thinking about Pike on the fly. Every spring and fall I usually head out to Lake Wabamun in search of some monster Pike. It is possible to find these huge northerns in the winter as well due to the warm water discharge that's released via the power plant. This winter will be the last for open-water fishing however as they plan to shut down the last remaining generator. Taken from their website at http://www.transalta.com/facilities/plants-operation/wabamun "TransAlta plans to stop operating the Wabamun power plant in four phases with the final shut-down of Unit 4 slated for March 2010. Until then, the plant will continue to be an important source of low-cost power for Albertans." I'm pretty sure you'll still find those big females hanging out there for a while yet as they are probably pretty used to this area being one of their favorite grocery stores. Eventually though and depending on what they do with the channel, this will be just like any other area for the Pike to bask in the spring sun. If you've never fly fished for Pike and want to give it go before the Lake is closed to spawning, bring along some long needle nose pliers, jaw spreaders, a big net or cradle if got if you one, an eight or nine weight rod and reel spooled with matching line. You'll also want some big flies (4-8 inches), waders, boots and some warm clothing. Also don't forget your camera. Although it is considered trespassing, I don't know anyone that has been ticketed for fishing here, just stay out of the fenced off area. When you enter town, turn right at the stop sign before the tracks and follow the road to just before the first bridge. This is the discharge channel. Park at the gate that is closed where the train tracks are and follow the path along the fence. Although most of our local lakes are too muddy to wade fish, at the end of the channel you can indeed wade where the channel opens up to the lake. Your best presentation is to cast upstream with a strip-pause-strip retrieve after letting the fly sink a bit. Heavily weighted flies on a dry line and a six to eight foot pike leader or a 20lb mono leader with Rio's wire tippet will do you well. My favorite streamer to fish here is a white Popsicle leech but you'll also have good results with deceivers, clousers and Half & Half's (1/2 clouser, 1/2 deceiver). If you do head out and you find yourself there on a windless day, try some top water poppers and sliders too. This is my favorite way to take pike on the fly but is usually nowhere near as productive as sub-surface flies. Here's a video to show you what kind of fun you can have on top water flies.

You may have heard of Marc Petitjean. In these parts he's pretty famous for his Magic Tool and his Magic Heads. I've used the Magic Tool and it really is a great tool to use for tying flies, I've personally found this tool to be remarkable especially when working with CDC. In my last post, I let you know about a wonderful website that features mostly fly tying videos and while searching through some videos on The Fly Tying Channel, I came upon a great video showing a new Marc Petijean Bobbin. I'm gonna see if I can source one of these out and give it a go, it looks to be very innovative.

There are tons of videos out there featuring fly tying. If you're anything like me, you can spend hours upon hours searching the web for different patterns. Of course you tube is a great place to find such videos but you have to be specific for the pattern you're looking for or you may end up watching videos other than fly tying. I just found this site however, it is mostly just fly tying videos so it's easy to search around. 235 videos and still adding as I write this. Check it out here... http://flytyingchannel.vodspot.tv/

Their latest video is the RS2 Sparkle Wing