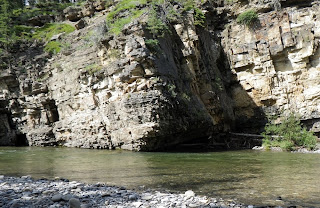 I got a text from Garnet, one of my best fishin' buddies, regarding a day on the Blackstone River. Our Blackstone trips have now turned into an annual event. We try and get out at least twice a year and for our first trip this year, we decided to hit it up a bit earlier. We once again did the 4X4 thing and found Camp Grizly, this time occupied by a couple guys in an outfitters tent. They weren't around when we made our way down the cliff face which wasn't as easy as last year since the rain had washed out some of the steps that had been carved out and the big tree that was used to hang a portable shower was now down and blocking the way. The day however was bright with the occasional cloud but no rain at all. The water was higher than past years due to a wetter then normal July which made fishing a little more challenging. Runs that held cutties in the past were a lot faster this time round so we had to concentrate on slower water in pools and back eddies, meaning we walked by a lot of water that we would usually fish. I started out with a Stimulator but wasn't getting near the amount of action that I had become accustomed to so I changed over to a foam Stonefly. Not much changed in the action and although I ended up netting seven cutties and a rocky and Garnet picked up six cutties, it proved to be a day were we had to work for every fish. After hours of making our way upstream we decided to take it easy and not fish so hard and to just enjoy being out in one of the best places on earth. On the walk back we ran into the two guys camped out on top of the ridge. They didn't fair so well and only hooked into a couple of rockies (guess we didn't do so bad after all). Getting up the cliff face was a lot harder than going down but we were pleasantly surprised to find the fallen tree had been cut up with a chain saw, no longer blocking the way. Click on any of the photos for a larger view. 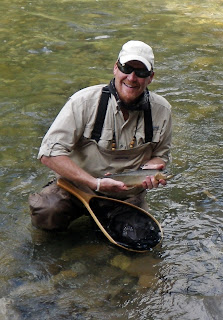 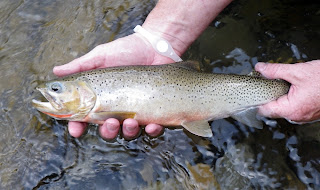 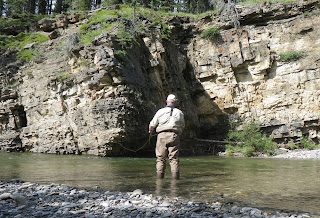 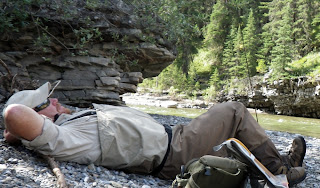 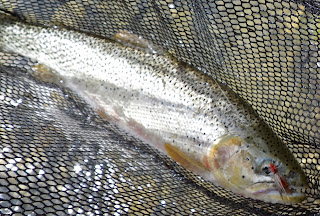 At least one more trip coming up shortly, this time a very good friend from back in elementary school will be joining us and he is not a fly guy, at least not yet ;)

In celebration of Alberta's free fishing weekend that ran July 7th & 8th, Tammy Karatchuk asked me to take her out for some fly tying and fly casting lessons. The video was shot at Cardiff Pond about 40 mins north of Edmonton. Free fishing weekends happen twice a year in Alberta, once in February and again in July. It's a great time to introduce those without a license to this wonderful sport as no license is needed but keep in mind, all regulation still apply.
Posted by Mike (Doc) Monteith at 19:58 No comments:

I thought it was about time to update my blog.  I've been busy with casting lessons and clinics and really haven't had too much time for fly-fishing myself so other than work, I really haven't had much to blog about.  This last spring however, I presented some tying demonstrations of my KISS fly patterns at some of the fishing clubs here in Edmonton and one of those clubs video recorded those patterns and posted them to their Northern Lights Fly Tyers / Trout Unlimited You Tube channel.  The flies I featured are all original patterns I came up with and work very well in the stillwaters around central Alberta.  I hope you enjoy these step-by-step patterns that are productive and easy to tie and.