Sometimes the fishing gods smile on you. And sometimes they just laugh!

It's been a long, cold winter and I've been looking forward to getting out on the water and hooking into some big stillwater lunkers since ice-on in November. I decided Wednesday was the day to finally head out and could think of no better way to spend it than on the water hunting for big trout with a good friend. So Phil and I made plans to hit Muir lake. Phil picked me up at about 12:30pm and we headed out, looking forward to some of those football shaped trout Muir is so famous for. Word was out that the trout made it through the winter even though the aerator on the south end of the lake shut down while the lake was still frozen (thanks to some furry critter that chewed through the power cable). My expectations were high, the thoughts of hungry trout and high catch rates filled my head (sort of like sugar plums dancing through a kids head at Christmas time but way better). When we got out onto the lake we headed over to one of my favorite spots trying to stay out of the wind. It was too shallow for strike indicators so we tried boatman and backswimmers using a washing line technique (floating boatman on the point with a wet boatman or backswimmer as the dropper). We saw many boatman in t 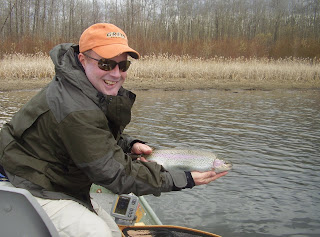 he water so we just knew we'd do well ('cause we're experienced stillwater fly guys). And after about 30 minutes we decided to move (so much for experience). The results where Phil one, Doc zero. Phil decided he wanted to try a little bay neither of us had fished before, so off we went. We anchored in about 2ft of water casting out to about 8ft. We tried leech and chironomid patterns under an indicator. End result here? Phil zero, Doc one bump. The day wasn't turning out the way I had visioned it. We fished in every decent spot on the lake and the trout were just not in the mood to feed. They were however in the mood for other things (like sex). Spawners were rolling, splashing and chasing in the shallows and we could have targeted them all day and probably done very well but apparently this is bad form (or so says ex-"BC" stillwater guy Phil). So we stuck to our normal fishy hangouts and kept plugging away. At the end of a cool, rain soaked day; the score was Phil six, Doc nothing. I did hook into and loose a few but couldn't get 'em to the boat. I'll tell ya, getting skunked on Muir is a humbling experience. Makes me re-think everything I've learned over the years. The fishin' gods were smiling on Phil yesterday but laughing at me. Not laughing as hard as Phil though, he was having a real good ol' time. Not sure if he was laughing so hard at me or my funny jokes though. Hey Phil, "Maybe I thould wefwase that, I'd like to thee her gallop thlowly".

Great site, I am looking forward to your future post.