Maybe My Last Fishing Day of '19 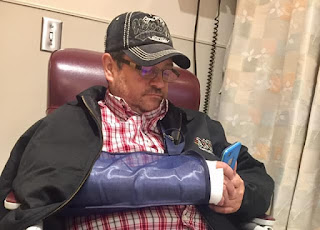 So here I was in a sling on the Saturday of the July long weekend. I was trying to free my mother's wheel chair from the back seat of my sister's car when suddenly I felt a pop just below by bicep. Found out later I tore my tendon and as I write this, I still haven't gotten in for the ultra sound to determine how bad it is. The reason I'm telling you this is because it's my casting arm. I can cast pretty decent with my left arm but that still doesn't help in playing or netting the fish. So, I thought I would post about the last time I went fishing.


I was just getting home from work on June 25 when I got a call from my buddy Joe. Asked if I'd like to join him in his (new to him) jon boat I recently sold him. In reality, he forgot his battery at home and I live not even 10 minutes away from Muir Lake so I figured if I'm gonna lend him my battery, he might as well take me fishing. 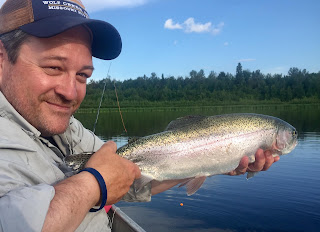 If you haven't been to Muir lately, the water is up and the lake is looking good. All this rain has done wonders as I'm sure it has for many of the small pothole lakes. The fishing however, from the reports I've been hearing has not been so good. Although I heard that last year too. The secret to this lake is targeting mid lake weed beds. Because of the browns, I'm almost guaranteed a fish or two hanging a leech pattern in amongst the weeds. As a bonus, some big rainbows also like to hang out in the weeds too. I caught three large trout that day, 20" brown, 22" rainbow and this 23" rainbow. All on a small black balanced leeche hung under an indicator. 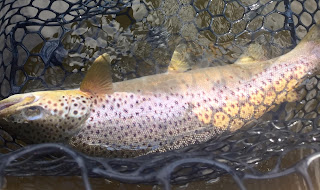 Now I'm not saying you're going to catch a lot of fish everytime you cast your presentation into weeds, there's more to it than that. Obviously your technique and presentation has a lot to do with your success. What insects you see on the water can help with your fly choice and choosing to fish where active fish are cruising is always a smart choice. But also the time of day can be a determining factor. These trout were all caught after 6pm when the air and water temperature starts to drop. Where in the water column are the trout feeding, closer to the top or hanging near the bottom? How much movement are you placing on your fly if any? Of course constant experimentation while you're on the water is usually the only way to unlock these stillwater mysteries. 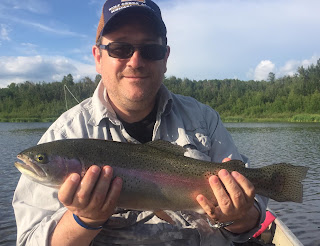 This particular day was especially important to me for a couple of reasons. As I stated above, I tore my tendon in my casting arm and I'm not yet sure how bad it is and if I'll need surgery. That being said, this may have been my last fishing day of 2019. But there is another reason too. I took a trip down to Montana in mid-June to check some things off my bucket list. One being to fish the Missouri River and the other was to fish the Big Blackfoot River. The Blackfoot is the river made famous in the movie A River Runs Through It. Although I enjoyed every minute of Montana and had a great time, Frank and I didn't do so well in the landing or netting department. We did hook into a good number of fish but in the four days we were there, only one whitefish was netted and being a stillwater guy, the Muir Lake evening was redemption for the skunking I took in Montana.

I'll leave you with a few photos I took in Montana.